Cohort based funnels and why you need them 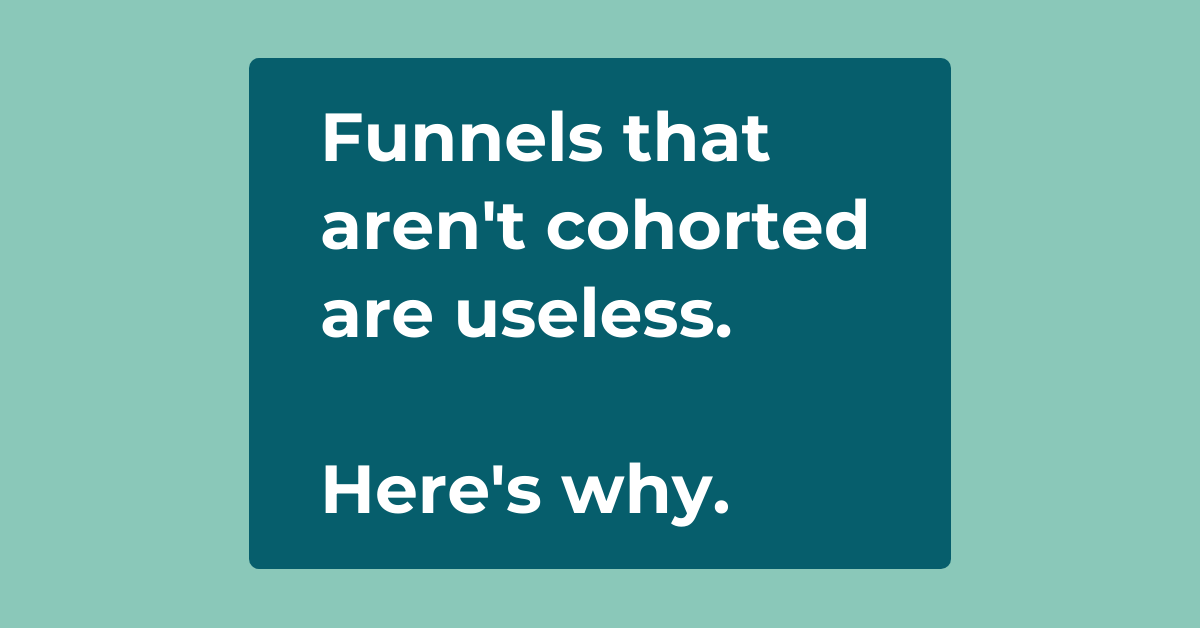 Surprise: What you have in Salesforce is not a funnel.

Why? Accounts move through the B2B SaaS funnel over a long period of time. Leads take weeks, if not months, to convert to closed-won deals. Some go faster than others. But the snapshot doesn’t differentiate between old and new accounts, or fast and slow accounts.

The snapshot tells you how many leads, MQLs, SQLs, opps, etc. you have as of today. However, the snapshot doesn’t tell you anything about how long accounts have been in those stages or how quickly they’re moving from one to the next.

The snapshot can’t be used for accurate conversion rates.

I’m talking to B2B sales and marketing teams here. In the B2C world, sales generally happen quickly and teams are used to thinking about cohorted metrics. I’ll explain why you should get used to it, too.

For a moment, let’s put business aside and think about runners in a long-distance race.

The race has a staggered start. A new group of runners begins the race every hour and only some runners finish.

Most runners who finish the race take about two hours to get to the finish line. If we look at the course at 10:00 am, we see:

It would be nonsensical to say the race completion rate is 38% (38/100). Some runners have only just started and others are still running.

Completion rate is steadily increasing, which indicates better runners. Even though group three is smaller than group one, it yields more finishers.

A Salesforce “funnel” is a snapshot, just like what we saw when we looked at the race course at 10:00 am.

Translate runners to accounts in your journey. With a snapshot, we’re looking at all accounts as if they’re the same, when actually some are fresh, some are stale, some are fast, and some are slow. We expect them all to have an equal chance of reaching the finish line, without considering that some of them just got started.

This is where the time it takes to move from lead to closed-won comes into play. When a typical journey takes eight months, we don’t naturally think an account that’s been in our system for two months is very different from an account that’s been in it for four months. But that ignores the fact that a new year started two months ago, or our sales team was restructured four months ago.

Making decisions off of a snapshot has serious implications.

Even if we look at a new snapshot every day, we’ll never learn about our business health from what we see.

What is a cohort based funnel?

A cohort is a group that enters your customer journey during the same time period. Replace the runners with accounts that all started in the first week of the year, or January, or Q1. The time period is a shared context.

A cohort based funnel is a representation of how a cohort is moving through your journey. It is a powerful tool that displays where accounts are getting stuck and falling out, and how quickly the group moves from stage to stage.

We need cohort based funnels to avoid the snapshot effect.

They unlock us to:

Looking at cohorts, we see clearly how healthy or unhealthy our business is at a given time.

One last reason to care about cohorts

You’re not alone if the cohort concept is new to you, but here’s something I’ve learned from talking to many, many business leaders: finance teams and boards of directors care about cohorts.

This model is how financial decision makers expect to understand business performance. If you want to be a data-driven business leader, cohorts need to be in your vocabulary and the conversion insights you share need to be driven by cohort based funnels.

How one high-growth sales manager spots (and squashes) chaos

5 things we learned about PLG from Dropbox