How one high-growth sales manager spots (and squashes) chaos 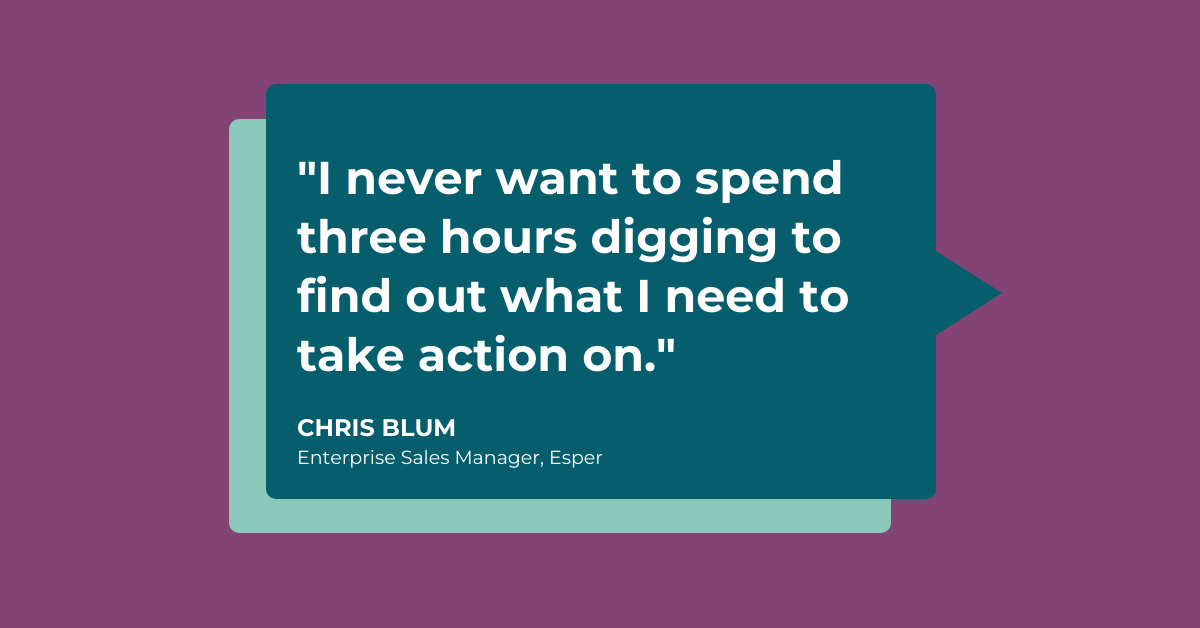 As a B2B sales manager, your team is responsible for prospecting and working on hundreds of opportunities, all at once. How do you know which people and deals need attention on any given day?

Chris Blum, an Enterprise Sales Manager at Esper, uses data to guide his attention. Of all the deals his team is pursuing, he focuses on the outliers.

Every week, he relies on answers to three questions:

Once he has a list of deals based on these questions, he can coach his team to get the deals on track.

“These three metrics are super useful because they let me spot chaos,” Chris says. “The earlier chaos can be spotted and addressed, the easier it is to arrest.”

Answering these questions and others like them is a regular part of Chris’s job, but it hasn’t always been easy.

Let’s look at what it takes to become great at spotting chaos.

Clearly, before you can flag deals that are moving too slowly, you need to define how quickly a deal should advance from one stage to another. Likewise, to track deals with close dates that have pushed too much, you need a baseline.

So, step one is setting parameters. How do you do that?

You’re not alone if your answer involves a shrug and an educated guess. But there’s a precise way to do this.

If you know your ideal customer journey on a per region, segment, and deal size basis, you can make a playbook to replicate that journey over and over. The playbook becomes your parameters.

We’ve run into another potential shrug, though. Do you know your ideal customer journey to a granular level? Can you say exactly how quickly your best three accounts moved through the funnel and how much time they spent at each stage?

Chris uses Journey 360 in Falkon to understand the ideal Esper journey for different sets of customers.

Journey 360 is a timeline populated with every inbound and outbound touchpoint  on an account-level journey from lead to closed-won. It combines data from both the sales and marketing teams, and from disparate platforms like Salesforce and HubSpot.

This tool unlocks the ability to know exactly what it took to close a successful deal.

“I’ve formed opinions as to what constitutes a well-run deal,” Chris says. “It’s really different versions because we have a very complex go to market motion with lots of different sizes, shapes, and scales.”

Knowing his playbooks means Chris has accurate parameters. Now he just needs to find the outliers.

Chris used to work with Salesforce dashboards. This method was frustrating because the dashboards don’t offer historical data or help you understand key drivers. To get actionable insights, you need to download the data into a spreadsheet and analyze it manually.

“I had some tools that were not very useful,” Chris says. “They were reasonable at showing the opportunities in the pipeline, but I never want to sit down and spend three hours digging through to find out what I need to take action on.”

One way to track the metrics Chris cares about would be to hire an analyst to manually slice and dice the data. However, Chris didn’t have the budget for that.

He went looking for a platform that could do it for him.

“My main focus in finding a solution was to say, ‘Here’s my set of questions that I want to answer on a weekly basis,‘” Chris says. “Wouldn’t it be cool if I could have the answers delivered to me in a convenient format every Monday morning so I could scan through and say, OK, here are the things to pay attention to?”

“I have a set of parameters and when an opportunity falls outside of these parameters, I get bells and whistles saying, ‘Chris, figure out what’s going on here!’” he says.

He doesn’t have to go looking for answers; the information he wants comes to him.

“It’s very high ROI,” he says. “I spend two hours per week and they don’t involve me trying to crunch through Excel and dig through data that doesn’t mean anything. I just go through the report, then work with my reps to take specific actions to move things along.”

When different metrics become important, Chris can update his report parameters. And if he wants to look at it between reports, the same information is available in drillable dashboards. He can use those to ask and answer additional questions, too.

Being good at spotting chaos makes Chris a better manager for his team. When he becomes aware of chaos, he can help squash it.

“Knowing what constitutes a good deal and having rigorous data governance policies, I can manage by exception. When the reporting lets me know something falls out of those parameters, I address it,” he says.

Using data as a basis for coaching has proven powerful.

“It’s been super useful and a great up-skilling mechanism for people,” he says. “Deals are messy, but having a framework holds people accountable. It helps them understand that they can make refinements in their own process to run deals better and more smoothly, and even make more money with less stress.”

In the team’s first quarter using this approach, deals picked up speed through the funnel.

“We saw improved velocity in Q4,” Chris says. “We had instances of deals that reps did not think they could close on the timeframe I was suggesting, but I was able to point back to the previous track record of their colleagues and help them understand that it was possible.”

Part of your job as a sales manager is to find the chaos on your team and get it under control. While chaos can be destructive, it’s not easy to spot when it’s swirling in a massive amount of data that lives in several systems without guardrails.

To see the metrics that indicate chaos, you’ll need to find your ideal customer journey to make a playbook out of it, put parameters around your data to look for outliers, and set up alerts to inform you when the outliers show up. Then, you can coach your team to handle them.

Learn more about how Esper has used Falkon during a period of high growth in their customer story.

5 things we learned about PLG from Dropbox

Sarah Guo on her playbook for PLG

How can marketing and sales win together?

Cohort based funnels and why you need them