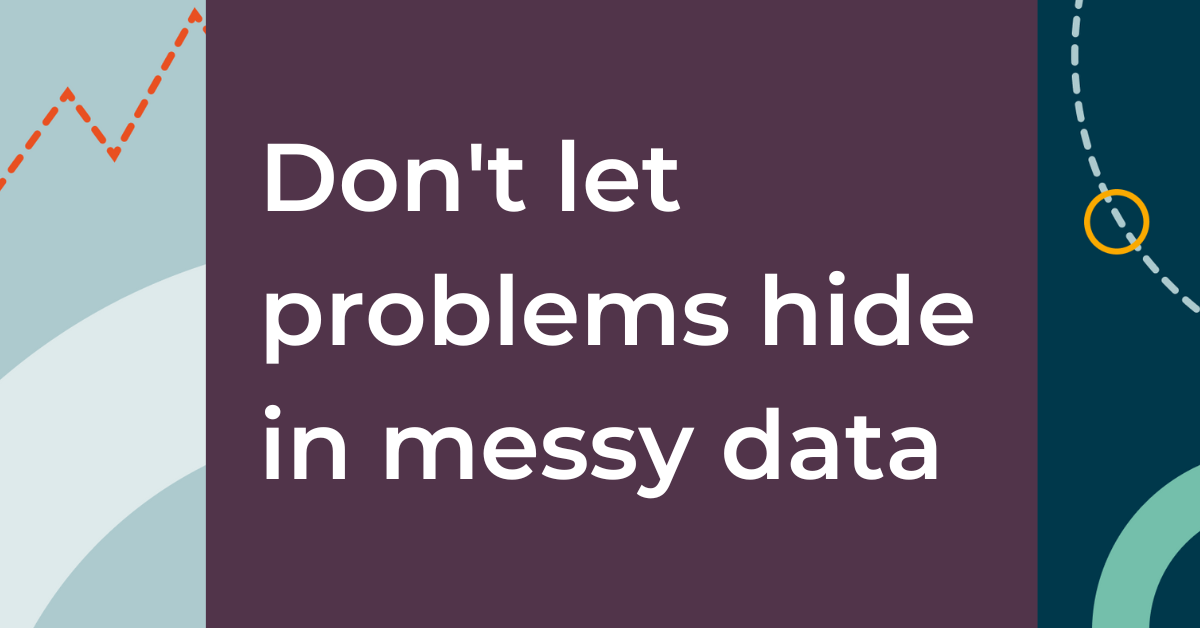 The concept of “messy data” comes up a lot in my world as Head of Data at Falkon. Our platform pulls in various data sources, reasons over them, and serves up actionable insights to help teams drive more revenue.

When people hear about that process, they commonly react with the assumption that their data is too messy to be useful. In particular, Salesforce data quality is a concern for many go-to-market teams.

Messy data is a problem because it gets in the way of taking the right actions. It hides accounts that need attention.

Our CEO has written about how to be data driven even if your data is messy, and I’m going to add some concrete steps you can take to clean up your data.

These five reports will help you do three things to drive more revenue:

You can make these reports using Salesforce or Hubspot and spreadsheets that will also prepare you to get better insights out of an intelligence platform should you decide to use one at some point.

What is messy data?

I’ve noticed that there are three distinct situations people refer to when they talk about messy data.

All three of these scenarios are problematic. I’m focusing here on the third one because visibility is the most vital component to making data actionable and it’s the most difficult one to make progress on without an intentional plan.

The first two problems need to be solved by sales or operations teams. The third should be solved by revenue leaders.

Each of these reports should take five minutes or less to set up with your current CRM, such as Salesforce or Hubspot, and a spreadsheet. They represent problem states that you might not otherwise see in aggregate data.

Taken together, these reports help you identify pipeline that’s stuck, neglected, and “fake” in the sense that it’s not really going to close in the quarter.

Once you see the deals that pop up, it will be easy to make decisions about next steps and improve your data quality.

Should an opp be prioritized? Should it be taken out of your quarter’s commit number? Should the rep be coached on how to move it to the next stage? You'll get clarity as you clean up your pipeline using these reports.

This report requires that you know your ideal sales cycle timeline by stage.

If you don't already know how long a deal should be in a stage, start by doing a quick analysis on recent deals to find those numbers by looking at the average time spent between stages for closed-won deals over the past year.

Create a report that flags any deal that’s been in its current stage for 1.5x longer than it should be.

Work with the owners of these deals to get them unstuck.

Why? Using this report on Fridays helps get initial questions in before the week ends. Then, set up deep dives as soon as the new week starts. This timing means you don’t lag on taking action.

Use the timeline you researched for stuck deals again to identify deals that are inflating your pipeline numbers.

Set up a report that looks for deals with a closing date in this quarter, but a stage that’s too early for that date to be hit.

To do this, compare the days between today and the current close date. Then compare that with the average time from the current stage to closing for closed-won deals over the past quarter. If the average number is 1.75x larger than the current number, it’s worth the time to check out what’s going on.

These deals may have dates that need to be updated, which the owner can easily fix. They may also have the wrong close date. Either way, they need attention to stay on track for the appropriate quarter.

Timing: Weekly for reps on Monday, every other week for managers on Wednesday

Why: Most of the time, this issue is simply a function of not keeping inputs up to date, so best to flag with the reps that own the inputs. Giving them two days before managers see the report is enough time to make the first pass at addressing the issue before it makes it onto the Wednesday report.

Deals that have had their close date change frequently, particularly three or more times, may also be inflating your pipeline.

Set up a report to flag any deals in best case and commit stages with more than two pushed-out date changes so you can find out from the owner if something is going on that needs attention.

Why: Pushed deals are one of the most common and frequent ways teams get surprised by missing their goals for the quarter. Checking on them weekly gives time to course correct.

Set up a report to capture active deals with a close date in the past.

Again, work with the owners to find out why the deals aren’t yet closed. Find out if they’re still legitimate opportunities and, if so, how to get them back on track.

Why: Similarly to pushed deals, past due opps often surprise teams at the end of the quarter. Finding out about them as soon as they happen gives the team a chance to close them or move them so revenue isn’t falsely tied to the quarter.

This report will help you identify deals that are slipping through the cracks or don’t have the level of visibility needed to drive effective coaching.

Set up a monitor for deals that haven’t had their next steps updated in the past 30 days.

These deals may be neglected by the owners, or the owners may simply not be updating their records. Both issues should be addressed.

If this data isn’t kept up to date, then your 1:1s will be about bringing status up to date rather than talking about solutions. Keeping detailed, up-to-date records lets you get context before a 1:1 so you can coach.

Why: While your ability to coach is affected by this data, it’s difficult for reps to keep tabs on every detail. Giving them the report before your 1:1 gives them the tools to understand their own pipeline status and update what’s missing without being nagged.

How to use the reports

Once the reports are created, follow these steps to use them to clean your pipeline data.

As you get used to seeing the reports and your team gets used to you reacting to the data, fewer and fewer deals will show up—the team will improve and the data itself will be more accurate.

You have a ton of data, but do you get actionable insights from it?

SDR tips from Landon Meyer: Stand out on LinkedIn & grow in your role

Landon Meyer's tips for SDRs: How to stand out on LinkedIn and more