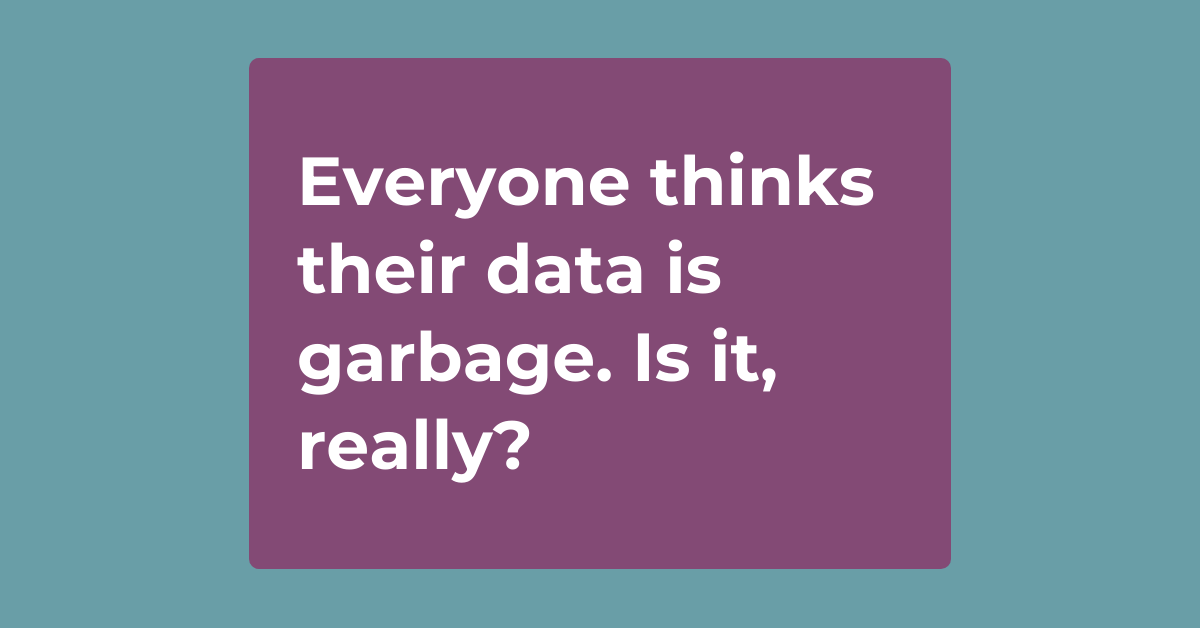 I’m not talking about people like me, who (used to) think of data as some kind of fuzzy cloud boobytrapped with sharp numbers and perplexing symbols.

I’m talking about the thing that has shocked me most since I started working at Falkon: people assume their data is too messy to work with. All people, pretty much. Even analysts. Especially analysts?

Seriously. Falkon can look about three layers deep into the mass of data most companies collect these days. When people hear that they’ll be able to explore below the tip of the iceberg that they’re used to seeing in dashboards, no matter where they work, they say the same thing: that’s awesome, but my data is garbage.

Here’s the other shocking thing: You’re already using this data to inform your business.

If it’s so terrible, why do you keep using it?

Mona, the CEO and Co-founder of Falkon, wrote about how to be data driven even with messy data.

I’m stuck on thinking about what’s going on here.

Maybe the concept of garbage data is less a reality and more a perception (though of course there are levels of data cleanliness). I have three ideas about where it comes from.

The pro of not doing anything about all of these is the same: it’s easy.

The cons are a big deal, though. Ignoring 90% or more of your data means you’re missing information that you could use to improve your business. Insights are the point of data, and you have buried insights. Lots of them.

I don’t actually have a solution here, other than to say: it’s OK to have messy data. It’s normal to believe your data is a disaster. Businesses collect so much information now that it’s created a virtual landfill of stuff no one’s looking at.

Maybe the question isn’t why people are scared to look below the surface. Maybe it’s whether we’re all collecting too much data. Or maybe it’s whether we need to stop and assess what metrics actually matter for our business, and focus on keeping those in working order. (One of my data scientist coworkers, Jensen, thinks you should definitely Marie Kondo your metrics.)

The thing I’ve learned from this phenomenon is that it pays to be brave and curious enough to work with what you’ve got because new insights are a great way to make better business decisions.

And if working with what you’ve got doesn’t actually work, hey, then take one step at a time to make it work. Cleaning data is never going to be all or nothing, and it’s not a one time thing. Mona says it’s a daily practice like meditation can be, and that sounds a bit like Marie Kondo, too, and so now do we think taking care of your data is actually something that can make you more enlightened, or at least lighter-feeling, like a tidy closet? Could be.

Messy data? Here’s how you can still be data driven.