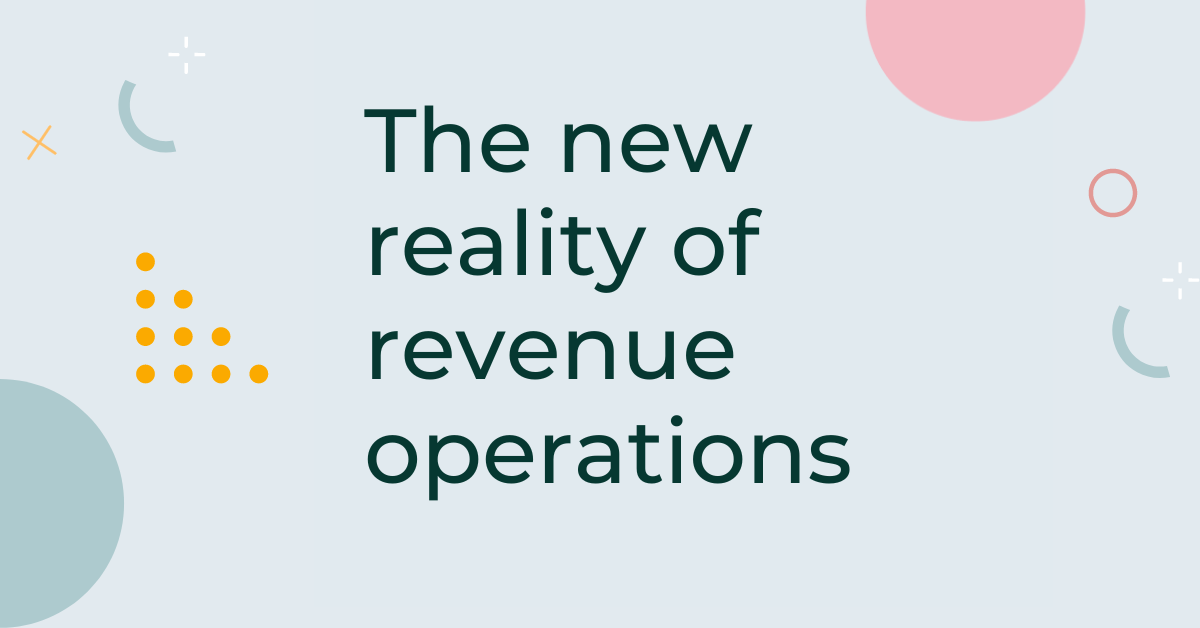 Falkon CEO and Cofounder Mona Akmal sat down with GTM and RevOps strategist Rob Auffant to talk about the future of the field and how people can prepare for strategic Revenue Operations roles. Rob is Senior Principal at consulting firm Point B, where he helps clients work through the same challenges he faced as Head of RevOps at Icertis, a role he had for two and a half years after an initial nine-year stint at Point B.

Their conversation yielded five major takeaways about the new reality of Revenue Operations.

RevOps is currently too focused on sales

Many of today’s RevOps leaders started as Salesforce administrators, then moved into Sales Ops roles. Eventually, they became revenue operations in name, but without much change to the actual role.

“A lot of RevOps out there is simply Sales Ops,” Rob said. “It’s just been focused on the sales execution piece, not necessarily understanding all the growth challenges that are occuring.”

The focus on sales keeps attention on the pipeline once deals are being worked without linking that data to what’s happening on the marketing side of the house. Meanwhile, the Marketing Ops team is managing their own tech stack, their own data, and their own knowledge of the customer. They generate leads but don’t see what happens to those leads.

“It starts to build up a silo of sales versus marketing. You can’t figure out where the growth challenges are unless you can get that end-to-end view of the customer journey and where they’re falling out of the pipeline,” Rob said.

Despite the mountains of data collected by companies today, an end-to-end view of the customer journey will remain elusive for RevOps teams that continue to focus on one silo.

RevOps should report to the CEO

If you spend time in revenue operations communities, you likely see one question come up often: Where should RevOps sit? Rob and Mona agree that the answer is ultimately unique to every company. Pushed to choose, they look to the CEO.

“At the end of the day, revenue operations needs to be thinking about where we are converting suspects to leads, and moving them all the way into becoming a customer and beyond,” Rob said. “That’s the CEO’s core goal, too. How are we going to grow and expand the company?”

Company objectives should come from the CEO, and each go-to-market function should share one to three revenue objectives while working toward their own key results that contribute to those objectives. In this way, the silo challenge begins to fall away.

The CEO benefits from being aligned with Revenue Operations as well, particularly a CEO who doesn’t come from a marketing or sales background.

“This is especially good advice for product-oriented CEOs,” Mona said. “As a product-oriented CEO myself, sales and marketing is not our forte. Having Revenue Operations as a direct partner for a CEO can be instrumental in their own growth in running a business.”

The idea of a CEO working with RevOps in exactly this way will likely shift as RevOps continues to become more strategic. Chief Revenue Operations Officer positions are poised to become common as the head of all go-to-market functions, and will be the most direct line between the CEO and the team.

"A strategic Revenue Operations leader needs to have that long-term understanding of where the company’s going and how to enable it to get there,” Rob said. “But there are going to be things happening every day that need to be fixed, processes that are broken, data that’s needed, and the leader has to provide that capability.”

Revenue Operations practitioners often experience thrash in their work lives because of the high level of daily requests. Most humans experience the urge to put out the closest fire, even if you know it may leave a bigger fire building that will be huge in nine months or a year.

To achieve balance, Rob recommends practicing ruthless prioritization in the short term and be intentional about your long range thinking. Have planning sessions that look at the next two to three years. Even if the entire leadership team doesn’t align on thinking that far out, make it happen for your team.

The path to strategic RevOps is flexible …

For Revenue Operations to truly encompass all go-to-market teams, it’s not enough to unite as a team of specialists. The leader needs to have a broader view and that view needs to go beyond the basics. If your goal is to become a strategic RevOps leader, plan to build experience in at least two disciplines to set yourself up to be the bridge between them all.

“If you’ve done tours of duty in product, sales, and marketing, it’s not just knowledge you acquire,” Mona said. “It’s lived experience. It builds so much empathy and changes how you think about problems.”

The intersection of product knowledge and RevOps is powerful for another reason, too. Product data informs marketing and sales decisions with customer insights, and that lever will become more important as product-led growth and usage-based pricing continue to gain popularity.

Working in different industries is also a plus because you develop your perspective on who you are as a strategic leader. Rob learned to prioritize long-term planning in part because he worked for a medical device company that had to think years out because of the nature of their product. He brought that valuable ability to zoom out into his experience working with faster-evolving SaaS products, where short-term thinking is the default of many leaders.

The idea of forging a path across different orgs and industries may seem at first blush like a mistake. Won't it create a scattered resume? Not exactly. An intentional path that tells the story of learning comprehensive go-to-market strategy should be valid to anyone hiring a Revenue Operations leader.

… and it needs to include data literacy

Working deeply with data leads to an inherently strategic mindset that is critical for a RevOps leader. Without that foundation, you’ll struggle to set the right objectives for the team to execute on.

“Being data literate versus relying on revenue analysts is a core competency that the RevOps leader needs to have,” Rob said. “If you don’t have that … you’re handcuffed a little.”

He spent part of his early career as a programmer, developing advanced understanding of relational databases. That way of thinking is a great base for Revenue Operations because he understands how the data an organization collects can work together to be analyzed for insights.

While you don’t need to become a data architect before turning to RevOps, understanding how data can be structured to be useful is important. So is the practice of digesting insights from the data you collect.

“People talk about making gut decisions. I think, if you understand the data, those can be very intelligent decisions without having to go do all the analysis,” Rob said. “You can’t always say, ‘Bring me the report,’ because that’s going to drive teams crazy … but if you don’t have that understanding of your data, it’s hard to make assertions and feel confident.”

Being data literate is table stakes for being a strategic RevOps leader. It’s not a differentiator, but a requirement to unlock the ability to make good decisions about the day-to-day tactical parts of the job.

If you’re someone who loves to think big while tackling daily challenges, it’s an exciting time to consider becoming a strategic Revenue Operations leader. The people working in these roles today and toward them for tomorrow are pioneers in a field that’s becoming increasingly dynamic.

Pursuing RevOps is a chance to forge a path that develops your analytical thinking, data literacy, long-term vision, and strategic bridge building. As more companies embrace the shift from tactical to strategic leadership, you’ll be ready to show them you’re ready to face all the challenges to revenue growth.

How to go from cold calling to warm outreach